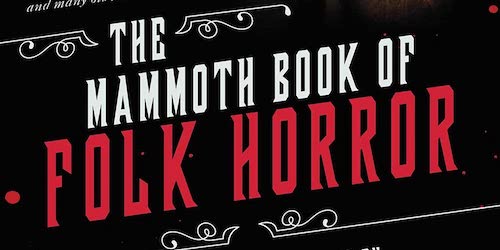 “The King of Stones” in THE MAMMOTH BOOK OF FOLK HORROR

I came up with the title “The King of Stones” before anything else. I know that’s common for a lot of writers, but it’s not so common for me. Or, at least, when I do start with the title, by the time the story is written it typically no longer applies, or I come up with one I like better. Titles, for me, are usually amorphous throughout the act of writing, and when they solidify is often during the final drafts. Not so with “The King of Stones”. I knew that title was a winner, and it sat in my notebook waiting patiently for its chance to shine.

It was a long time coming.

When I received the invitation from Stephen Jones to write something for THE MAMMOTH BOOK OF FOLK HORROR (Skyhorse, 2021) I knew immediately I’d write something called “The King of Stones”. The idea for the story itself, though, is a bit unclear to me now. Looking at my records, the notion of a tree being important seems fully formed at the outset, as did the use of stones (unsurprisingly), and somehow the concoction of those two cause a reaction that allowed the rest to pretty much fall into place as I worked.

Here are the two most interesting things to happen while writing: the first involves the sudden jump from one setting to another. While I was writing I realized I didn’t really care what happened between those two moments, and though I could write it out, it seemed more expedient just to skip it altogether and get to the good stuff. I filled in the gap later in the story, but what might have taken pages before had now been reduced to a few sentences and nothing much changed. It’s was a lesson for me I try not to forget. The second thing to happen was when I was already working on the final drafts of the story and the idea of peach pits struck me. That one idea reverberated backwards and forwards through the story, tying things together in ways I hadn’t expected but was incredibly happy about. There’s some symbolism there, too, that’s unavoidable. It’s one of those changes that affects a story so profoundly it seems impossible to believe it wasn’t there at the start. Well, it wasn’t.

While in the midst of working on the story I was also discovering the music from the 90s Riot Grrl movement, something I was certain aware of and adjacent to at the time, but for some reason had managed to slip by me. You can see this infiltrating my imagination when you consider the history and the dynamic of the story’s two female leads, and their affection for women-driven punk and the zines that help give rise to third-wave feminism (before it was coopted by corporations and transformed into “girl power”). But almost as important was Liz Hand’s “The Least Trumps” in inspiring me to consider an aging women punk rocker as an interesting choice for a protagonist.

If I’m unsure of anything in the story, though, it’s the spot where I lifted and incorporated a lyric from a Nick Cave song. It’s a powerful line and inspired the climax of the whole piece, but it stands out to me when I read it. I’m hopeful though that isn’t the case for most readers. I’m also hopeful it’s not something I’ll be sued over. So, please, no one tell him.