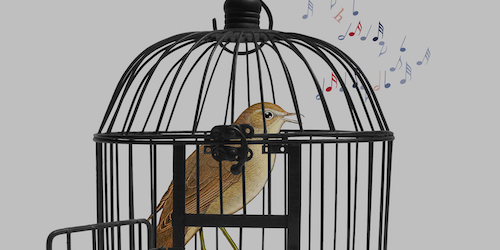 This year marks the tenth anniversary of my third collection, NIGHTINGALE SONGS. Published in December of 2011 by Dark Regions Press, it was the first and only original collection under their banner (the other books of mine they published were reprints of my first two collections, and a special edition of the fourth).

NIGHTINGALE SONGS doesn’t have as cohesive a story as my other collections. The way I wrote stories for the first eight years was simply by writing whatever I wanted. I had no grand plan for how my inevitable collections might look. I thought no further than the story I was working on. It was somewhat by chance that by the time I started collecting my stories I had written enough in one mode of horror to group them together into the first collection, then enough in another mode to group them into the second. Once I was working on the third, NIGHTINGALE SONGS, I didn’t have as consistent a group to work with, and I didn’t think much about it. I simply published them.

I was lucky, to a small degree, that by that point, the two modes I was working in were blending together more and more, and the differences between them were becoming murkier. Still, I think overall the collection has a wider range of quality than my other books. I think the good stories are very good, but the number of them compared to the more mediocre tales isn’t has high as I might have liked in hindsight.

At the time, the cover was a concern as well. Jason Van Hollander had done some great work for a number of people, and I was excited to have him work on a new piece for me (I can’t remember for certain any longer, but I believe he approached me with the idea of working together). When I saw the final output, I thought the elements were good but the composition wasn’t as strong, and with his blessing I reworked it into its final published form. Looking back on it now, I think that was a mistake. I see the cover I created as being particularly safe and rigid, lacking the spark someone like Jason brings to the work. Also, who the hell was I to rework a piece by Jason Van Hollander? Who did I think I was? It seems to be me now both embarrassing and insulting. I hope Jason eventually forgave me.

Critical reception for the book was good. The idea that I might be writing not horror fiction or ghost stories but instead “Weird fiction” was only starting to be spoken about. Also, with two books under my belt, people were starting to know my name and hear about my work. At that point, I really felt I was on a rollercoaster car ratcheting up to the top of the first hill. Other writers with whom I was friendly were starting to make a name for themselves, too, and it really felt as though we were starting to make inroads into something real. I asked John Langan to write an introduction for the book because at the time I felt, of these peer writers, he was most on the wavelength of what I was doing. And he handed in a fantastic piece. Through some connection via Laird Barron (perhaps via a comment on a Facebook post) I made the acquaintance of Nic Pizalatto, a writer with one short story collection and one novel under his belt. He was kind enough to write a blurb for the book, just as he was kind to mention my work a few years later when the Wall Street Journal interviewed him on the airing of the hit television show he’d created, True Detective. But that’s a story for another time.

So here we are, ten years later. The book itself wasn’t nominated for awards, and overall it never made as much money as my first two books (both of which had the advantage of being published twice), but at least one story appeared in Stephen Jones’s BEST NEW HORROR series, and it contains two of my favourite stories. It may not have set the world on fire, but I was pretty proud of it at the time, and even if it wasn’t the best of the books I’ve written, it was an important book for me to write. It was a transition book that got me on the track to where I was going. For that reason, if no other, I’m happy it went out into the world.

(Sadly, NIGHTINGALE SONGS went out of print a few years ago and is currently only available used, if you can find it. There has not yet been an ebook edition.)