“The Beautiful Fog Ascending” in SEARCHERS AFTER HORROR 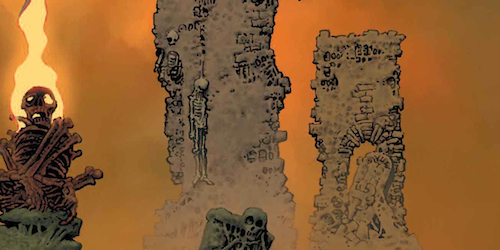 The story was written in the midst of work on my latest collection, BURNT BLACK SUNS (Hippocampus, 2014), which is comprised mainly of novellas and novelettes. While working on this series of long-form stories, I was starting to feel as though I would never finish another story again, and decided to take a break and write something short on S. T. Joshi’s invitation.

As to where this story in particular came from, I’m at a bit of a loss. Going over my notes, I see it has threads of Machen, of Pan, of a song from an 80’s Canadian band, and an episode of a popular fantasy television program. Yet at the heart of the tale, it is driven by a sense of loss, of trying to reconcile the past with the present. There’s an unspoken truth to the events that isn’t all that difficult to tease out, but throbs in the background, colouring everything that surrounds it. I like to believe this is an example of how horror’s use of abstraction and metaphor can tackle subjects in different ways than it’s normally given credit for, though I must admit to me it’s the same sort of horror I’ve read in the works of Steve Rasnic Tem and Charles Grant that made me fall in love with the genre in the first place.