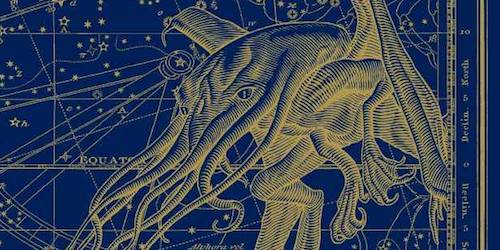 There is a lot to say about the origins of my story, “Thistle’s Find”, from BLACK WINGS III (PS Publishing, 2014), but very little I want to go into. The story was a cathartic experience for me, but not in the way most would imagine. At the time I wrote it, I was in the midst of a long string of heavy, restrained stories, and I felt weighed down by them. As a break, I decided to try writing something off-the-cuff, something that wasn’t worried as much about subtext and subtlety. Something that wanted to be a wild ride. The core of the story comes from the snippet of a dream I had many years ago, and when I was done writing the story I was pretty pleased with the results; it’s violent and sexual and adventurous, and I had more fun with it than I ever expected I would.

I don’t think of myself as a science fiction author, but I do have a science degree, and retain an interest in scientific matters, so it’s inevitable that every once in a while science creeps into my stories. It did in my earlier story, “Cold to the Touch”, with its themes of environmentalism, and will do so a few times in my upcoming collection, BURNT BLACK SUNS (Hippocampus Press, 2014); and it does so here as well. In fact, it was this story’s science-fiction/horror-hybrid nature that made it a good fit for the Lovecraftian Black Wings series. At least, I think it’s a good fit. As does S. T. Joshi, the series’ editor, I suppose.