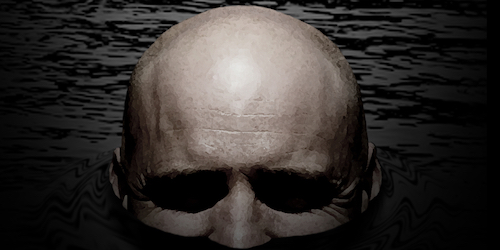 BENEATH THE SURFACE: 10 Years Later

In all the excitement of launch parties and interviews and other preparations during the ramp up for the publication of my new collection, NOTHING IS EVERYTHING, it occurs to me that I let a momentous anniversary slip past. That, of course, was the anniversary of the publication of my first collection of short stories, BENEATH THE SURFACE, which went into print exactly ten years ago near the end of September.

I’d been writing for about six years before the book saw print, and in that time I’d gathered a number of short stories together—enough that I had material for two books (which is why, a year later, I was able to publish COLD TO THE TOUCH with Tartarus Press).

When it came to finding a publisher for BENEATH THE SURFACE, I looked to a small press I’d seen do great work with a number of my contemporaries in the British scene at the time. Humdrumming made some very nice looking books, and I was excited about the prospect of joining their roster. So, I wrote a letter to the head of the company at the time and made my pitch, only to hear back immediately that not only were they interested, but they’d been intending to approach me for some time! It was, as they say, kismet.

Until this point, I’d tried to sell other publishers on the idea of publishing a collection from me, but faced the same obstacle each time—despite the quality of the work, I’d not yet achieved enough notice or notoriety to make publishing a collection of my work a lucrative venture. The bread hadn’t fully risen, so to speak. At the time, it was disappointing, but in hindsight it was perhaps the best thing that could have happened to me, as I think BENEATH THE SURFACE turned out better as a result.

When the day came that the folks at Humdrumming had read enough of the book to tell me they would like to publish it, I was… let’s just say I was ecstatic. Finally, a book. My name. On a book. I’d done it. I’d reached a milestone. There was no turning back.

I remember trading manuscript pages through the mail and receiving proofs. I remember staying up late to design a mockup of the book’s cover that ended up turning into the final artwork for the book’s cover. I remember fretting over ligatures and grammar and design. I remember long phone calls discussing all nature of things related to how to make the book the best it could be. And I remember all the small mistakes I wished I’d corrected before publication (but it’s always this way).

When the book was launched at the British Fantasy Convention in 2008, I took my first flight (let alone first transatlantic flight) to Nottingham to attend and promote it. Alas, when the actual launch was happening, I didn’t realize it and was in another room, but I managed to find my way over about 20 minutes late to sign copies for those still milling about, and talk to people much more famous than me about it. I remember Mark Morris introducing himself, as though I didn’t already know full well who he was. It was an exciting time.

Even there, though, there were rumblings of problems at Humdrumming, and about six weeks later I found out that Humdrumming was closing down. My first book had been in print for just over a month, and suddenly it was over. They’d only printed 100 copies, and of those 18 remained, so I took them in lieu of my unpaid royalties and ended up selling them privately over the next few months to anyone who was interested. Then, as quick as it began, it was over.

But that wasn’t the end of BENEATH THE SURFACE. A few years later (and another book later) I decided to see if I could find another publisher willing to take it. After all, with only 100 copies in print, I figured it was more or less unpublished, and there were plenty of new readers that had yet to discover it. It took a while to find someone interested, and even when I did with Dark Regions Press, I got the impression they were dubious of the idea. It took a few months of prodding to get someone to read the book, but I think one they did they became much more interested and engaged and excited.

The contents of that edition were slightly different, as was the cover, but I still think of that volume as the definitive version, the one that should have been from the beginning. Thankfully, Dark Regions remained in business throughout the book’s new three-year existence, and plenty of copies got shipped around. But like all good things, it eventually had to end.

Today, BENEATH THE SURFACE exists only as an electronic book through Amazon. It’s not the ideal edition for most people, but at least it’s something for those desperate to read it. Perhaps one day interest will warrant a new edition, but for now I think I can rest knowing that it had two chances to make its mark on the world, and remain immensely proud of what it was and everything that sprang from it.

Ten years is a lifetime, in some ways, but it’s also just the blink of an eye, and I barely feel as though I’ve begun to write yet. The new book, NOTHING IS EVERYTHING, is quite different from that first collection, and yet without the bricks BENEATH THE SURFACE laid, I would never have been able to write it.

So, happy birthday, BENEATH THE SURFACE. May your horrors always remain a set of closed eyes away, and let the nightmares to wrought, both intentionally and unintentionally, continue to reverberate through all who’ve experienced you. Let’s check in again in another ten years and see how we’re both holding up.

eBook edition of BENEATH THE SURFACE available now.