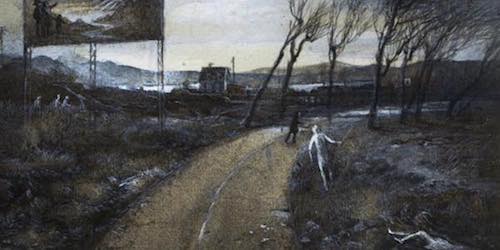 SHADOWS & TALL TREES, VOL. 7 (Undertow Publications, 2017), edited by the fantastic Michael Kelly, is now shipping, and it contains a new story from me entitled, “In the Tall Grass”.

When I first started the story, it was 1992, and I was thinking less about being a writer than I was about anything. I had only just left high school, and was unsure what I wanted from life. I knew I wanted to create things, but didn’t know if it would be through prose or pencils or paints or any of the myriad of mediums available to me. So, I indulged in them all to one degree or another, filling notepads with doodles and drawings and random snippets of poorly written prose and even more poorly written poetry. It was in one of these latter poems that I first dreamed about a sad parent and their tree-shaped boy.

Over the next few years, I added more and more to this story, layering short paragraphs on to it as though it were a papier-mâché sculpture. It never extended more than a few pages in length, but at the time it was my greatest and most involved project. Eventually, I started testing it in other mediums, creating paintings and drawings that might somehow capture the bittersweet story I hoped to tell, but never managed to.

Eventually, I left it behind. I didn’t forget about it, not really, but it became a story I told myself I would one day tell, if only I figured out how. And so it languished in the notebooks of my youth, patiently slumbering.

When Michael Kelly approached me about the return of SHADOWS & TALL TREES, and invited me to send him a story, I knew I needed something different from the cosmic weird fiction I’d written for my previous collection. Michael and S&TT needed something stranger and more fantastic than that, and it didn’t take me long to remember I had a story already partially written, one that had all the elements I knew he would like. All I needed to do, I was confident, was brush it up, add an ending, and it would be ready to go.

As is often the case with such plans, they went horribly wrong very quickly, starting from the beginning when I re-read what I’d written so many years previous and discovered how little of it was useable. In fact, now that the story has been told, I see I saved only a few lines from that original text. Around it, the story grew and branched in ways I didn’t expect, much like the boy at the centre of the tale. I also managed to fit in a scientific explanation for his state, something I’d stumbled across a few years ago and knew instantly what to do with.

“In the Tall Grass”, like many of my stories, is a story of loss. But I also think it’s a story of hope, and overcoming. And of coming to understand one’s place in the world. I’m proud it found a home in SHADOWS & TALL TREES, and I hope you buy a copy of the journal so you might read it, and read all the other wonderful work between its covers.