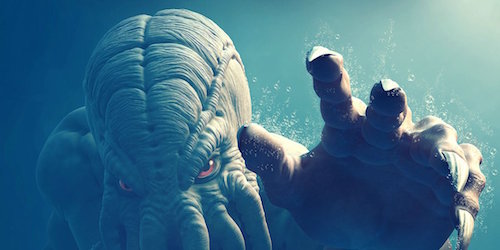 I was also pleased when Paula Guran selected another story from my collection, BURNT BLACK SUNS, to reprint. This time, in her sequel anthology NEW CTHULHU 2: MORE RECENT WEIRD (Prime Books, 2016).

The ideas behind “On Ice” stemmed from a science radio show on Canada’s CBC Radio. It outlined a research expedition to Miellville Island, and some of the interesting discoveries there. When I heard the story, I immediately knew it would make a great setting for a horror story, but I didn’t know what it would be. So, I saved an audio recording of the episode and let it sit on my hard drive for years until I came up with something to do with it.

It was after a lazy, inattentive reading of a story by Sarban that an idea sprung to mind. I’d fuse two different notions I had—one for the expedition, the other for a god trapped in ice—and create something that I hoped would be interesting. The piece stretched out longer than I’d initially anticipated, and much of the interaction among the researchers mutated along the way, but in the end I was pleased to be able to convey a bit of how Lovecraft inspired and continues to inspire me.