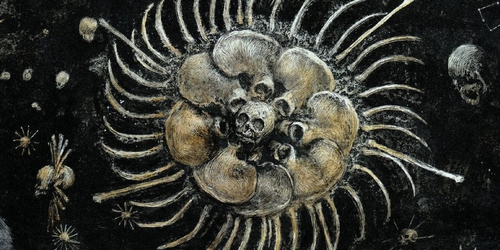 This is not a review. John Langan’s THE WIDE, CARNIVOROUS SKY AND OTHER MONSTROUS GEOGRAPHIES (Hippocampus, 2013) is his welcome and long-awaited second collection. John is arguably my favourite from this latest generation, and it’s because he works with traditional forms of language and narrative, but does so in non-traditional ways. Few other writers in the genre—at least insofar as I read them—use the techniques of literary post-modernism in decidedly genre-based experiments. Take for example the Poe tribute, “Technicolor”, which puts a lecture on the page that turns more bizarre the longer we study it, or the Our-Town-by-way-of-zombies theatricality of “How the Day Runs Down”. Which isn’t to say when John takes a more traditional tact he isn’t spot on. “Mother of Stone” is an intense and epic narrative, heightened by its flipped gender imperatives, and is perhaps my favourite story in the book. The more I consider it, the more I come to realize that John Langan truly is slated to become our next Peter Straub—a literate author straddling the line between genre and non-genre. He is one of those rare authors simply too good to be working in the ghetto of the Horror genre, and the fact that does so willingly when he could be so much more respected outside of it is a boon to us all. His work elevates the genre simply by being a part of it.