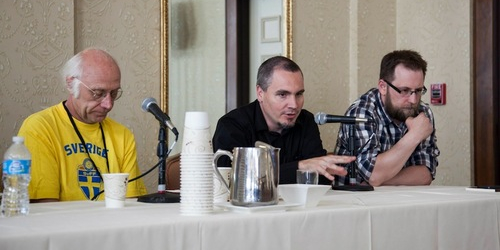 NecronomiCon has come and gone, and I must say it turned out fairly well. As with any first time convention, there were a few bugs to work out (such as missing name tags, and programming that felt a bit too spread out) but overall none of these issues proved too disruptive. For the most part the convention offered me what I most wanted — a chance to catch up with some old friends and some new.

Above is a photograph from the panel I was invited to participate on, sitting alongside my good friend, Richard Gavin, and Jonathan Thomas. Also on the panel with me were Lois Gretch, and Daniel Mills. The panel’s edict was to discuss modern mythos fiction, though I fear we centred more on the generic “weird”. At times, the discussion was a bit heated, but I think that helped keep the conversation interesting to those watching. Nothing worse than a dull panel where everyone agrees with each other.

Though evening activities were planned by the organizers, I instead spent mine in the company of friends I don’t see nearly enough, namely John Langan, Laird Barron, Paul Trembly, Jack Haringa, and Michael Cisco.

This convention also gave me the chance to meet a lot of people I’ve known before strictly from online life. Technology has allowed us all to make these connections, but in many ways they don’t seem substantial until an opportunity presents itself for an in-the-flesh meeting. Thus, I was able to solidify my connections with some truly lovely people such as Joseph Pulver, Scott Nicolay, Nick Gucker, Shawn Bagley, Selena Chambers, Justin Steele, Mike Griffin, and Tom Lynch.

I managed to find time amid the celebrations and talks to indulge in a little shopping, and purchased a copy of Michael Aronovitz’s ALICE WALKS and a suburb Cthulhu statue from Joe Broers.

NecronomiCon was a convention a long time in the making, and the organizers did a fantastic job bringing people together for it. There are rumours of a sequel in 2015, and if so I imagine that event will be a must for everyone interested in the Lovecrafian weird. Me, I’m still trying to recover.