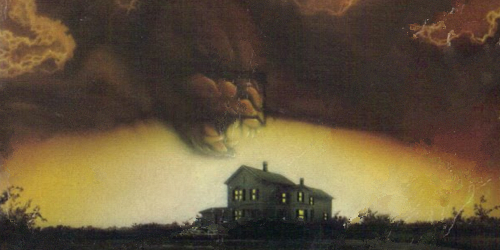 This is not a review. T. E. D. Klein’s DARK GODS (Viking, 1985) is one of those books, the sort that gets called “influential” in interviews with other authors, that is a staple of the “best of” lists whenever they appear. And it is with good reason. DARK GODS is the sort of book that encapsulates how exciting the Horror genre was during the heyday of the boom. At no other time could a book of four novellas inspired not only by the California Circle but by the Lovecraftian Circle go on to become an international best-seller.

One striking aspect of the book is that Klein’s protagonists, for all their eduction, are unfaithful and flawed men. They are questioning, rational, and almost as a whole self-absorbed without quite realizing it, or caring to. When the supernatural invades their world, they don’t believe it, instead trying to think it away. But the threats that face them are often too big to be considered, and though these men are able, for the most part, to survive their experiences, it is this reflection that proves to be the true vector for horror. It is what’s revealled in the aftermath that they have to find a way to reconcile.

In regards to Klein’s craft, he shows a mastery of evoking terror from the accretion of details. Small moments gather and reflect on one another to reveal a horrible tapestry by the tale’s climax. It also leads to turns of phrase that, divorced from their context, are benign, but as a part of the whole become frightening to consider. This is the sort of thing that seperates the experts from the pretenders. And T. E. D. Klein is no pretender. With only these four novellas, and the preceding novel, THE CEREMONIES (Viking, 1984), Klein established himself as a premiere force in the field. A true writer’s writer, even two decades out of the spotlight hasn’t dulled the shine of his star. Nor should it ever.